Report of Fukushima Dialogue, 11 February 2018 (2nd day) - to share current situations and the future of Odaka area of Minami-soma City

We held the Dialogue at Minami-soma City Information Exchange Centre on the second day. For the Dialogue, we'd asked to join the people not only who lives in Odaka area but also who attended the 8th ICRPDialogue Seminar that had been held in May 2014 in Minami-soma City, and asked to talk about what has been changed and unchanged from then. 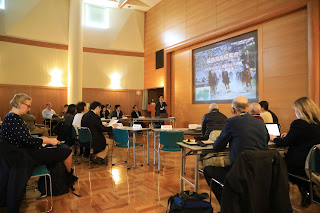 Many of the attendees from overseas also had attended the 8th Dialogue, so this clearly highlighted the change of the situation then and now.
In the 8th Dialogue seminar held in May 2014, voices of anger, sorrow and confusion were still strongly remained, and concerns for radioactivity were repeatedly raised.
However, at this time such concerns were hardly raised in the Dialogue, and instead, it became a major theme that how to rebuild the daily life and area communities from now on, which had been drastically changed from that of before the disaster. 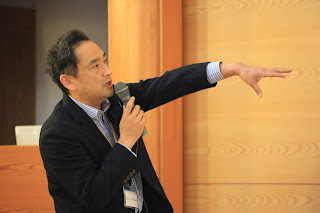 Compared to before the disaster, the production-age population decreased about 13 000 in whole Minami-soma city. Among rapid population decrease and the ageing society, plus considering gradually settling reconstruction works and decreasing workers engaged in, it is becoming a major issue how to enliven the region.
Meanwhile, from a viewpoint of people who returned and are living in the area, issues were told about how to establish independence in daily life among loosen local relationships, which once close. Ms Kamata at Ohmachi Kirakira Salon, who engages in community activities at reconstruction public housing, told her story about why she started to promote communication: She felt a sense of crisis against the situation that without an intervention people even cannot give the names of neighbours nor where they live in, since they newly start their lives in reconstruction public housing, gathering from different places they originally had lived. With persisting activities, people recognised the faces of each other bit by bit, and they gradually formed connections that have greetings upon meeting. However, it is also told that there are not that many reconstruction public housing that such autonomous actions are held, so in other than such places the communities in reconstruction public housing are difficult to be organised. 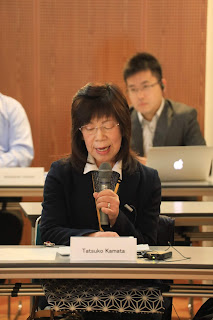 Furthermore, there was an indication that after the disaster people are becoming 'support addiction' and their self-help is hindered by excessive supports from the outside. On the other hand, what I realised is that there is a dilemma in the situation in decreasing and ageing population, people face difficulties in maintaining the local society without supports from outside.
A story was told about a local table tennis club formed by some people returned home in Odaka area, having a good time with playmates. The club T-shirt presented there says:


"Wanna fish at Murakami, wanna dig clams at Kawarada, wanna pick sansai at Kanaya and wanna eat them all!"

I think many of the people who choose to return certainly have returned with such wishes in their mind. 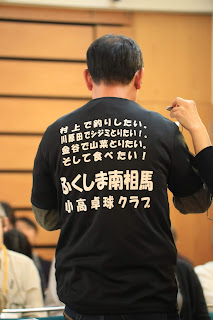 In Minami-Soma, not only Odaka area had been under evacuation order but also the coastal area had enormously damaged by the tsunami. Each place has different situations, and furthermore, the passage of time after the disaster has enlarged the situation change. From the Dialogue, it can be surmised that even people who live there have a difficulty to understand the entire situation.
It was impressive that a number of attendees told that such an opportunity for communication is very important to share each other's changing situation. This had not been seen in the Dialogue held in 2014. I think this reflects the followings; the situation becoming settled allowed people to have a spare feeling to look at the situation around, and furthermore, the number of people is growing who want to look back the change of the situation, and want to know the situation around more properly. 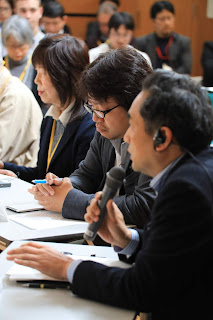 Personally, I am concerned that some people seem hesitating to say their feelings, who are not in the circle of returners expressing their intention to make things go by themselves. After the Dialogue, some people who I personally listened to told that

they couldn't express themselves satisfactorily.
This is a major matter that should be reviewed as an organizer of the Dialogue. Moreover, I strongly felt that it is necessary to elaborate the Dialogue structure among the diverging situations. They told that they had the hesitation to tell their stories because they were afraid that

they were dragging down the rehabilitation or people would think they were backwards-looking.
It would be true that the concerns for radioactivities are declining, however I am anxious about there was hardly any talk on such things, supposing that they are unconsciously avoiding to touch the issue, by the feeling that it would bring in reputational harm by talking about their concerns.

Apparently, people who already returned home tend to have a scheme of the regional revitalisation in their minds supposing that the people who are still in refugee not to return anymore. On the other hand, it seems there are those who are in refugee have some feeling towards the situation.

Even though they do not return, it's not that they forgot their home nor abandoned it. If they have a chance, they still want to engage in the issues on their home where they can, and want to help by what they can, but they do not know what to do, nor how they can be involved
-- voices of such an internal conflict were also heard. 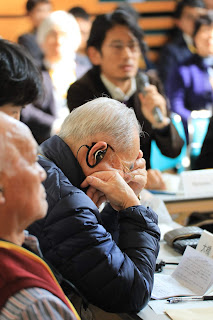 The rehabilitation is not something done in a couple of years: It must even be a very long-term process of continuing into the future. In such a long time passage, of course, people will move. Perhaps there would be someone who returns in a decade or two. Or there would be someone who considers living in the land of his/her parents or grandparents. Or there would be someone young once left home changes his/her mind after some time. Not dividing people between to return or not at the moment, I think it would be important to maintain the environment more people wish to live in who have relationships with the area to enable them to support the rehabilitation. 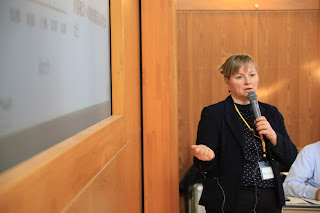 Ms Astrid Liland at Norwegian Radiation Protection Authority, who once had been visited Minami-soma in 2014, told her thought about the difference between last time and this time. She told that she is very glad to see the advance of the rehabilitation and to feel a far more relaxed atmosphere, but she also pointed out there are some cycles that an action to cope with the disaster-related problem brings another new problem again. For example, the accident occurred and radioactivity had spread. Decontamination to address this problem brought other problems such as decontamination wastes and temporary storages, and furthermore, lead to the issue of intermediate storage facilities. The same thing could be said for the issue of solar panels. These cycles are seen in many situations without being solved and are complexly intertwined. I also think there is an aspect that these cycles make the rehabilitation issues more difficult.

This time the Dialogue made us feel that the stage of rehabilitation after the disaster has been largely changed. It has also indicated that issues hereafter would not be solved in a short time, and will require us a long-term strategy. I think a phase comes that persistent efforts are required furthermore. 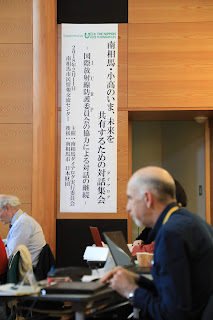 And last but not least, I would like to express my sincere gratitude to the staff of Minamisoma City Office, Mr Shigehiro Sugi, Mr Hiroshi Yoneda, Ms Tatsuko Kamata, Mr Hiroshi Murata at Odaka Redesign Center and Nippon Foundation, for their enormous cooperation for holding this Dialogue.