Report of Fukushima Dialogue, 10 February 2018 (1st day) - to share current situations and the future of Odaka area of Minami-soma City

On 10-11 February 2018, we held the 'Fukushima Dialogue to share current situations and the future of Odaka area of Minami-soma City -- Continuing the dialogue in cooperation with the International Commission on Radiological Protection (ICRP) -- ' in Minami-soma city.

We held a field tour in Odaka area where the evacuation order was lifted in July 2016 on the first day, and held the Dialogue at Minami-soma City Information Exchange Centre on the second day. 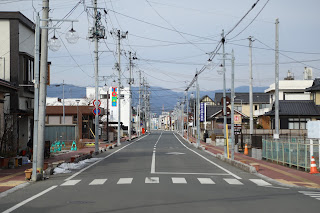 Gathering and originating at Odaka Station on Joban line, we rode on a bus with guidance from local people. At first, we passed through the shopping street run straight from the station, comparing with some pre-disaster photos. There was no damage from the tsunami around Odaka station, but many buildings were collapsed or damaged by the earthquake. The area had been prohibited to enter just after the NPP accident, never had a chance to repair. So buildings were gradually damaged during the no-entry period, and as a sequel, were demolished and left vacant lots. Comparing with photos from when the street was bustling realised the difference so clearly. 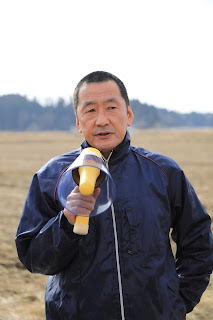 Then we visited Mr Takashi Mizugai who have resumed farming in Hanzaki district and listened to him in front of the fields. Mr Mizugai and his fellows undertook to weed fields as a rehabilitation association from November 2012, just a year after the disaster, and they started test cultivation of soybeans since 2014. He told that nearly all results were ND from the crops continuously cultivating since the first year. Including rice fields that are currently under maintenance, they are going to jointly manage approx. 12 ha by 4-5 personnel. The reason why they first started from soybeans is that irrigation channels for rice fields have not yet been reconstructed. Around this area agricultural water is drawn from Ogaki dam in Namie town. Before the disaster, there were local groups called 'yui' and they each had maintained channels in their area. Since the disaster forced them to evacuate, channels in some area toward Odaka are completely out of maintenance, so it had been not able to water the rice field. Furthermore, population decrease in the area also affects the field management. He told that it is impossible to keep the same level of management to that of before the disaster, and the issue from now on is how to continuously maintain with the decreased manpower, having help from outside. In his thought,


it would become a major turning point that whether they can find young successors within the coming five years.


'Even after the lift of the evacuation order, few people return. Almost all community has vanished which had been before the disaster. People who took up residence in refuge places would never return in the future. I think it would be unachievable to restore everything as it had been. Still, at least I want to restore the scenery itself. This is my motivation to resume farming. By restoring the beautiful rural landscape from before the disaster, I want to prepare the environment that people want to live in, no matter they return from refugee places or they newly come. So I'm going to continue to farm.'

This was very impressive. Furthermore, there was a question about reputational damage for the crops. His answer was that the market valuation can't be estimated at this time, because all of both soybeans and rice which they have raised so far have been delivered as for livestock feed, and subsidies account for a large portion for this use. 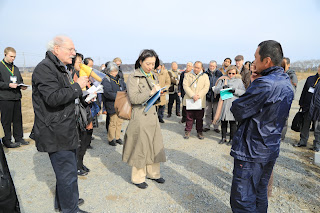 After that, we had a bus ride through a hilly area in the east of Odaka, and visited a 54-ha large-scale temporary storage area and some places that solar panels are installed. Solar panels are rapidly spreading at a pace that even locals surprise if they come after some interval, so the landscape had significantly changed from what it had been. Most of the land where panels are extensively installed are places where originally had been fields and meadows, so the local guide told us that he is sorry since the landscape there had been his favourite one. 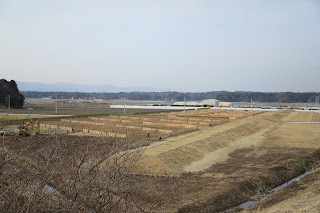 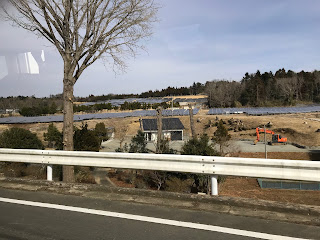 In the afternoon, we visited the coastal area hit by the tsunami with a guidance by Mr Hiroshi Murata at Odaka Re-design Center. The population of Odaka area before the disaster was 12 800, but the number of registered inhabitants is 8 600 as of February 2018, so it is decreased more than 4 000. This number comes from people moved out from Odaka area, in addition to people who had died from the tsunami and earthquake. He told that in his estimation, people who are actually living in Odaka area are around 2 500, and probably around 4 600 people would return ultimately. He also added that it would be a great challenge how to maintain the area itself within the largely decreased population compared to that before the disaster. 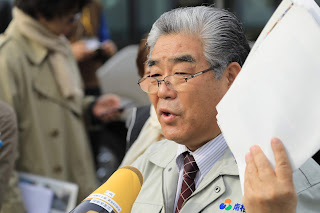 We were told that the temporary storage that we visited in the morning is the largest one in Odaka, and one we visited in the afternoon and in the tsunami-hit coast is the second largest, about 40 ha in extent. In the tsunami-hit coastal area, villages have vanished which originally had been there, and the area will be non-habitable in the future. It is not yet decided how to utilise the land where had been rice fields, and he said


this is a worrisome problem since there is no inhabitant who maintains the land.

Then we could get the whole view of the coast from a height in Urajiri district. The embankment construction is almost completed, and at the moment it seemed that some subordinate constructions were proceeding. He said that in past, there was a long beach around here that was even able to host an athletic meeting of the district. Even from before the disaster the beach was becoming eroded, and now there is no trace of what it used to be, by the ground subsidence from the earthquake and by the embankment itself. Along the coast, we could see two temporary incineration facilities. We were told that one is for disaster wastes from the area within the 20 km radius, and the other is for combustible decontamination wastes from outside of the 20 km radius. 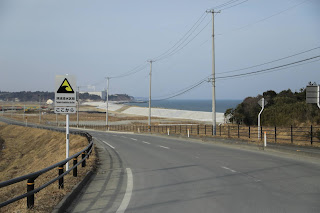 He told that while Fukushima Daiichi NPP was under construction around 1970 there were many people engaged in the construction work from this district. At that time, economically there was no other business than paddy rice cultivation and not a few went to work in cities, so such a near construction site work became a precious income source.

Then we'd also see the sights from a height in Tsukahara district. The height seems more than 10 m above sea level, however, the tsunami also swept here and we were told that Mr Murata's mother was one of the victims. Currently, there are 70 people, 27 households in the district, which once had been 460 people, 120 households.

He concluded the explanation by saying that:


'How to maintain the district community will be a major issue with the population decreased to 20-30% from once had been, and with a decreasing number of visiting volunteers as time passes from the disaster. The fading memories of the disaster is also an issue that I feel strongly about.' 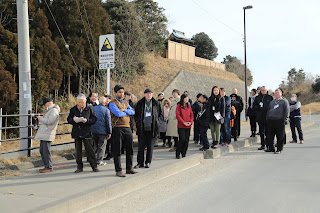 As time passes from the lift of the evacuation order, the distinction between who returns and who will not is becoming clear. I think that issues are coming to light that in what way the local communities and daily lives can be maintained, in the situation which no such population recovery can be expected as of before the disaster. Especially, at this time, I was impressed by that many words were spoken about the 'landscape'. In the tsunami-hit area, the original landscape has been completely lost by the tsunami. But this time I'd well realise that not only in the tsunami-hit area but also in the affected area from the NPP accident, the landscape is becoming quite different from it had been before. In such a situation, there is an impressive attempt to regain the original landscape through farming. After the disaster, many people have been rushed within the big movement of 'reconstruction'. However, I think a phase is coming, to take a glance backwards reflecting whether what we have done has been best or not. In such a phase, the first thing coming across one's mind might be the 'landscape'. Why do people want to live in that place? Of course, convenience, hospitals and places to work are important factors. However, the 'landscape' might be also one important factor, and we might have been totally forgotten this factor. This is what I personally but keenly felt. 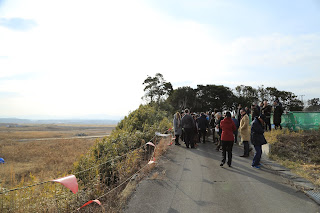