On 25-26 November 2017, we held "Dialogue with residents of Yamakiya to share current situations" in Yamakiya district, Kawamata Town.

On the first day, we had a tour around Yamakiya district. Gathered at Kawamata Town Office in the morning, and after having had a greeting from Mr Kanemasa Sato, the mayor of Kawamata Town, we set off in two separate buses. The following description is based on the schedule of the group which Ando had attended. 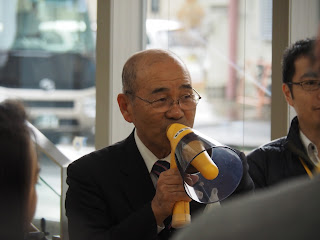 Yamakiya district is in the Abukuma highlands. Nevertheless located in the mountain area, the terrain is very gentry-sloping around there, letting you forget the fact that you are on the mountaintop. Agriculture had flourished since long ago, and also the land had been used for grazing since before the war, utilizing the gentle terrain. Cattle grazing had been active before the disaster, and it is told that military horses had been also raised before the war. This tells the long history as a rangeland. 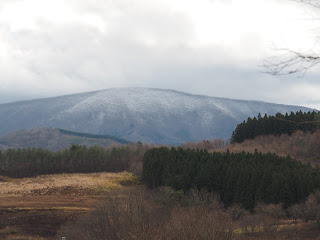 Climbing long stairs, we first visited Yasaka Shrine, which has a roof covered with copper sheeting. At the shrine, a performance called "Sanbiki-shishimai (dance of three lions)", which is told it has a history more than 300 years, is offered on every October. This custom had been paused by the evacuation order from the accident. But following the lift of the order, the performance is resumed on October 2017, the first time in seven years. Originally, performers should be boys around ten or eleven years old, but this time adults performed instead since there are few children in the district. 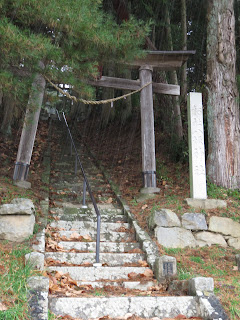 We heard some stories of troubles, e.g. they started to patrol around the shrine while the period of the evacuation order, especially to secure the copper sheeting of the roof from robbery.
Unfortunately it got cold on the day, and it snowed and hailed while we visited the Yasaka shrine, so we turned up the collar of our coat while the visit. 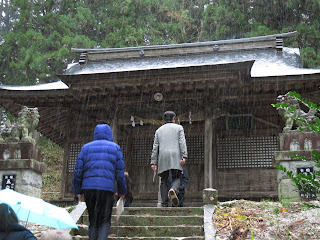 Then, we visited Ms Kuniko Hirono, who cultivates lisianthus. Yamakiya has been known as one of the best lisianthus-producing districts from way back, for its rich flower colour brought from the temperature difference and its high quality.
The sudden NPP accident and the following evacuation order had forced to discontinue the production. Not a few people had nothing to do at the refuge as they lost their farmworks, but within them, she told that she worked hard instead as a board member of the temporary houses and so on. Even from before of the lift of the evacuation order it had been allowed to resume the production of lisianthus in Yamakiya, but she told that at the early stage she had been dispirited seeing ruined greenhouse by heavy snowfall after the evacuation and so on. Even so, she was encouraged by some factors, such as that marketers told there is hardly any reputational damage for lisianthus. Consulting with her family, she finally has managed to resume the production, with rebuilt facilities such as greenhouses by utilizing subsidies and so on. It was impressive that she told smiling that she loves lisianthus. 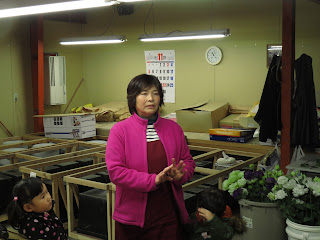 However, while the production pause, some new variations of lisianthus have been introduced, and market preferences have been changed for flower training (arrangement of branches and number of flowers). So some trial and error were needed to update the situation awareness, but with this effort, she becomes able to keep the satisfactory quality, and the market also values it highly. I realized that producer-side efforts are also needed to update the situation when restarting production for flowers and ornamental plants, which are influenced by the technical advance and the fashion of the times.
She told that now her biggest trouble is short of hands, since from decreased population by the evacuation, there are few neighbours who come and help farmwork in a busy season. She concluded her talk by saying that one will enjoy agriculture, especially the culture of lisianthus, so if there are young people who want to try it, she welcomes them to join.

Next, we visited the forest verification site in Yamakiya district. Chiba University and other institutes continuously observe the dynamism of cesium in the forest. This time we had an on-site explanation from Dr Tatsuaki Kobayashi from Chiba University. 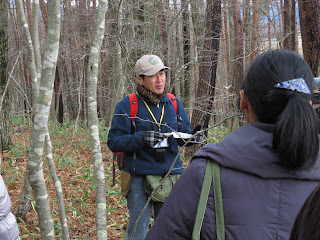 He explained that the continuous investigation here shows that the most part of cesium-137 stays in the forest floor. Cesium is hardly flown out to the outside water, and mostly stored in the forest. Especially in the forest floor, cesium stays in black and soft soil within about five-centimeter depth, and no tendency is observed to sink into the deeper soil. And he told the absorption of cesium-137 into timber varies by the tree species. In case of red pine there is virtually no absorption, but in case of Quercus serrata it slightly absorbs and transfers cesium. That said, even in case of Quercus serrata, the overwhelming majority of cesium-137 is deposited on the bark in the current situation. Still it seems we need to keep the situation monitored. 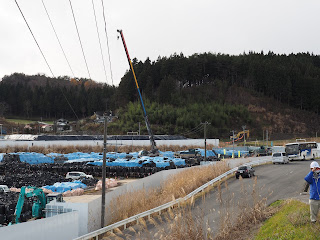 We would like to thank people from Fukushima Regional Environmental Administration Office of Ministry of Environment, and on-site management people, despite it being a holiday.
Reference: Kawamata Town webpage for temporary storage sites (Japanese)

Finally, we visited Mr Kinichi Ouchi in Yagi area. The entire Yamakiya district is a place of scenic beauty surrounded by gentle hills, and furthermore, Yagi area is prominent within the district. So the scenery from his house was excellent. It was impressive that he often told he wish to protect and care the beautiful scenery. 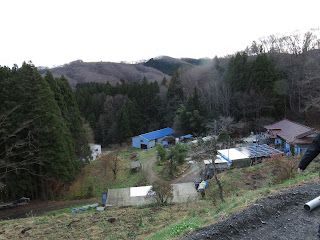 He told that the disaster came just when things were going smoothly for his farm of the greenhouse cultivation of mini tomato after many troubles. The NPP accident and evacuation ruined the farm, just after he'd thought he can take some repose. Because he had to care his old mother at that time, he evacuated after the completion of temporary housing construction to avoid multiple movements during the evacuation. He also worked as a board member of the temporary houses, rather harder than he and his wife had before the disaster. Still, every day he visited his house twice a day, taking two hours once, to feed his dog left at the house. The only time he couldn't go was when heavy snow had blocked the road, and even at that time, he walked to the house pushing the snow aside, after driving a car up to halfway, as soon as the snow had been cleared from the nearby main road. He said he is currently preparing to start greenhouse cultivation of anthurium, not an edible product which has a concern for reputational damage. Questioned that how official supports from the government, municipality and experts helped his business, he answered that he expects nothing from such official supports. He told he had done everything by himself from before the disaster, and still he is doing. 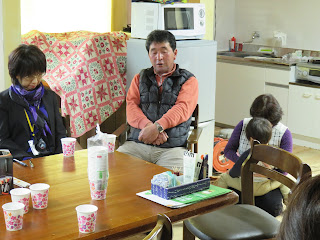